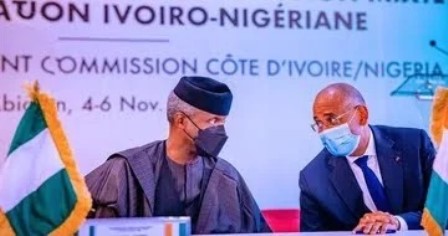 Nigeria and Cote d’Ivoire, two of the biggest contributors to ECOWAS’ Gross Domestic Product, are basking on the euphoria of revivified bilateral relations.

The maiden edition of the meeting, which took place in Abuja in August 2013, led to the signing of six sectoral agreements and the establishment of Special Implementation Committees in both countries to monitor progress.

Bilateral agreements reached at the 2nd Session of the Binational cover, inter alia: agriculture, digital economy, education, consular and immigration matters, prevention of human trafficking, defence and security among others.

Addressing the session, Osinbajo said Nigeria and Cote d’Ivoire, as two of the largest countries and economies in ECOWAS, were duty bound to cooperate in the interests of their citizens and the rest of the region.

Osinbajo said that the shared values of democracy, protection of human rights must continue to be the guiding principles for cooperation for mutual benefit of both countries and for the well being of West Africa.

“As two of the largest countries and economies in ECOWAS, Nigeria and Cote d’Ivoire are duty bound to cooperate in the interests of our citizens and indeed the rest of the sub-region.

” This 2nd session of our Binational Commission gives us the opportunity to re-affirm our wish to deepen friendly relations and to further strengthen and diversify our bilateral ties.

“Our shared values of democracy, protection of human rights and our aspirations for peace, progress and prosperity must continue to be the guiding principles for our cooperation for mutual benefit and for the well being of West Africa.”

He said that the meeting was significant in the sense that it was the second session since it was upgraded from a Joint Commission to a Binational Commission.

Osinbajo said that the meeting which was held at a higher political level signalled even greater commitment to improving cooperation between both countries.

” It is also encouraging that we have been able to hold this meeting despite the difficulties posed by the COVID-19 pandemic and an uncertain global economic environment.

“It reflects our political will to place Nigeria-Cote d’Ivoire relations on an even firmer footing.

“The maiden edition of this Binational Commission which took place in Abuja in August, 2013 was very successful.

“ It led to the signing of six sectoral agreements as well as the establishment of Special Implementation Committees in both countries to monitor progress.’’

According to him, the sectors covered in the agreements are of great importance to both countries.

“In agriculture for instance, Cote d’Ivoire is a leading producer of key commodities like cocoa and coffee which are crops that Nigeria also produces and there is certainly great scope for learning and collaborating in the international trade of these commodities.

“In the same vein, given the large number of Nigerians who have made their home here, it is important that both countries cooperate closely on consular matters.

“We must also work closely to tackle the evil practice of human trafficking which seems to be on the rise in this region.”

He said that he looked forward to closer military cooperation between both countries so that working together could help to maintain peace and security of our countries and neighbourhood.

“With peace, businesses will thrive, so we are very much looking forward to the convening of the Business Forum leg of this Binational Commission.

” In this regard, it is my sincere wish that the holding of the Business Forum will lead to the establishment of a Nigeria-Cote d’Ivoire Business Council.

“Such close tie between the business sectors of both countries also means that we should move speedily to finalise negotiations on avoidance of double taxation agreement and to review our Bilateral Air Services Agreement, so as to facilitate movement of people and cargo between both countries.”

He said that to be meaningful, the agreements signed had to be implemented so that both countries could reinforce mechanisms for monitoring and evaluating their impact.

Osinbajo said that the Special Implementation Committee must be fully reactivated and revitalised so that both countries could track progress given the additional agreements that were to be signed at the session.

“Nigeria and Cote d’Ivoire must continue to build closer economic ties, especially within the ambit of regional integration agreements like ECOWAS and the African Continental Free Trade Area,” he said.

The vice president said that the integration agreements must be seen as an opportunity that went beyond trade, but one that helped to deepen regional value chains.

Sharing similar sentiments, Achi said that the meeting was an ideal platform to improve the quality of trade cooperation between both countries and the ECOWAS region.

He said it would also address common interests and challenges in areas of security, oil and energy, security, private sector investments, among others.

Achi thanked Osinbajo for his strong leadership and insightful guidance that led to the adoption of relevant measures that would be helpful to both countries and strengthen their bilateral relations.

On his part, the Nigerian Ambassador to Cote d’Ivoire, Martin Adamu, expressed optimism on improved relations between Nigeria and Cote d’Ivoire.

Adamu said that the goal of the meeting was to reactivate existing agreements.

He said that the volume of trade between both was sketchy as it was largely informal.

“This bilateral commission was instituted in 2013 by then President Goodluck Jonathan and President Alhassane Ouattara, and they felt at that time, it was high time for both countries in the spirit of African brotherhood, to take their relations to the next level.

“What is happening here today is the 2nd edition; unfortunately, it was meant to take place some years back but because of COVID-19, it was delayed, but finally we have come to the fruition of the 2nd edition of it.

“The vision, in this case, is to strengthen the existing agreements between us and also to bring them up to date; wherever there were lapses and issues that are now moribund should be revitalised.

According to him, the Binational Commission is very important because it seeks to encourage private sector participation.

“And in that way, when the trade is formalised, then you will begin to have statistics and then you can determine what the volume of trade is between both countries,’’ he said.

More so, the Minister of State for Industry, Trade and Investment, Maryam Katagum, said that Nigeria and Cote d’Ivoire had very good economic relations but the balance of trade had been largely in Nigeria’s favour.

She said that Nigeria was looking forward to establishing value chain, adding that one of the key decisions at the meeting was to encourage the organised private sector to come in.

Onyemenam said she believed that the MoU would curb irregular migration and trafficking in persons.

“It will help us a great deal in checking the menace of irregular migration, smuggling of migrants and trafficking in persons.

“We believe that these factors exacerbate banditry, while herders/farmers clashes will be checked to a great extent.

“The MoU will also help to foster already existing relations, capacity building for law enforcement officers and intelligence gathering among others,’’ she said.

Deserving no less attention, the National Agency for Prohibition of Trafficking in Persons (NAPTIP), applauded the agreement as it had received 88 rescued victims of human trafficking from the authorities in Côte d’Ivoire.

NAPTIP’s Director-General, Dr Fatima Waziri-Azi, said that the partnership would be strengthened by the signing of a Memorandum of Understanding (MoU), on prevention of human trafficking between both countries.

All in all, stakeholders at both ends, see massive, mutually beneficial and all-encompassing prospects in the renascent Nigeria-Cote d’Ivoire Binational Commission. (NANFeatures) 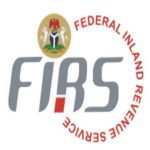 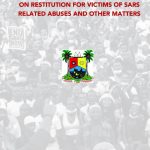